1865 was a crucial year for the Car Industry for being the birth year of Henry Ford. Age 15 he constructed his first steam machine, and not longer than 16 years later, he ended his first self propelled vehicle: the quadricycle. By 1903 he founded Ford Motor company and few years later designed the first moving assembly line for his model T, revolutionizing the car manufacturing process for good. This was the first time ever a car manufacturer could produce vehicles addressed to a large count of population due to its significant low costs reengineered production scheme.

Life went on and the world witnessed several disruptive human creations that changed the world for ever. Most of them driven by some of the world´s largest humanity crisis ever, such as WWII and the Cold War. Aeronautical industry, space industry, satellite, communications, etc. were some of the areas that where these innovation were set on.

Some of these industries evolved until today, enabling significant democratization of entrepreneurial based services industry such as commercial banking. Most of them led by young founders aged around 35-45 years old that pushed by entrepreneurial spirit and technological advances pushed innovation ahead.

It is not surprising that the banking industry is suffering - or benefiting? – from the dramatic technological improvements we have seen in the latest years in the provision of financial services. Who needs today a bank with thousands of branches in your own country when you want to send money to a friend using a cellphone? Or a stodgy banker when you can apply for a consumer loan using your app? Or expensive fees for sending money abroad when social networks can do it for you? Examples abound.

The production function has shaped the industry just like other technological innovations have shocked investors in other industries: Tesla in the automotive sector, the fracking in the oil sector, the solar panels and turbines in the energy sector. And the financial and stock markets are internalizing this effect: the sustained fall in the value of the big banks in the past three years is indicative of the changing appetite.

There is a slew of new companies emerging under the earth. Mercado Libre in Latam was born as an online marketplace and now offers payment services in several countries. By the way, I forgot to mention it's worth USD 76 billion, three times as much as BBVA today. Alibaba's financial arm was about to be the highest IPO ever, valued at around USD 300 billion, until the Chinese government stepped up. These tycoons are the ones you most often see in the news, but there is plenty of other examples, all over the place: Nubank in Brazil was created five years ago and is opening accounts at a pace of 1.5 million per month; it has 2,500 employees and the speed of light, versus 100,000 employees from the largest banks in the country. According to the latest Series round of investments, Nubank Is valued at USD 10 billion.

A good representation on the appetite of investors and huge growth of Fintech companies, is represented by Global X Fintech ETF evolution of their stock price. 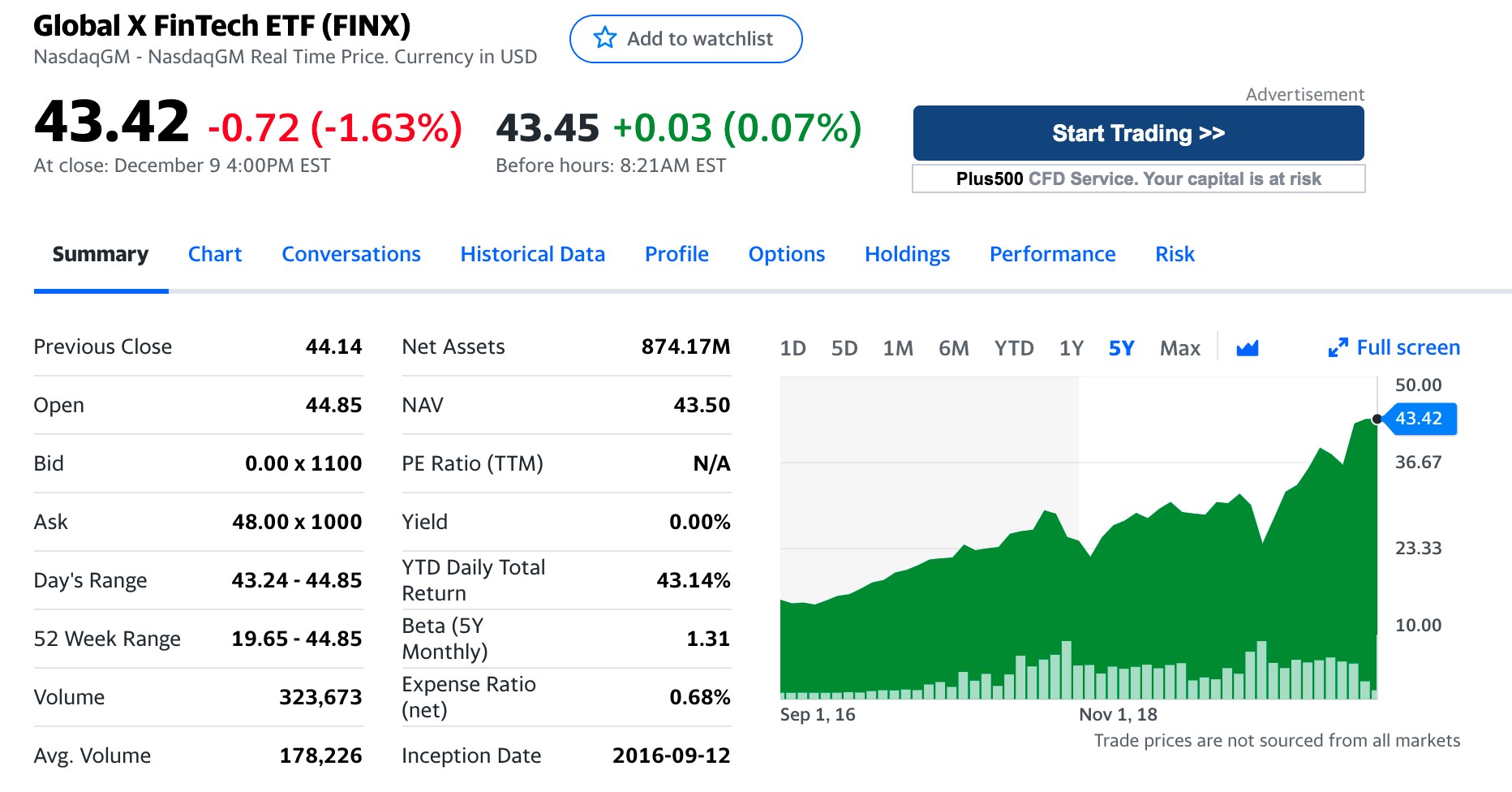 All these companies base their success in a couple of fundamental principles: they operate in heavily regulated markets were incumbents are big, slow to react, and often acting traditionally like 30 years ago; but they bring freshness to the table by using brand new backoffice systems (have you seen Capital One’s legacy systems?), young motivated people to their teams, bosses who challenge de status quo and think out of the box, and are not afraid of the use of new technologies and methods. Machine Learning algorithms and non traditional data to predict credit behavior? They are all welcome in this new world. The old banks are still using 20th century logistic regression models and measuring the t-test of its coefficients.

A while ago, I personally met some corporate bank's risk modeling team which was still using statistical methods such as Information Value (IV) for variable selection while building their models. Though this method was largely used 20 years ago until today, there is strong evidence that it is counter indicated for big data processing as it will isolate large counts of variable with low significance away from the model, preventing those to be selected. Big Data modeling assumes that large counts of low significance variables could enhance the predictability as it could produce better segmentations.

In addition of the attractiveness these Neobanks represents to investors, it also has a strong appealing for talent recruitment making it a virtuous cycle. Most of the talented new professionals are highly attracted by rapid growth companies, new learning experiences, flexibility and globalism. These issues are greatly recognized in the Fintech Industry and counter perceived in traditional banking.

The largest concern these days on the above elements, relies on being most of the bank's priorities the year 2000's concerns and not 2020's. While the Neobanks are starting to enjoy the sweet spot of lending, keeping short proximity with their customers through online/App based platforms and transactional based operations, the banks struggles to keep up the costly unbeneficial infrastructure such as branches, corporate offices, huge bureaucracy and a long time consuming decision-making processes.

Despite the massive health impact and economic crisis produced by Covid19, we still can get some positive things out of it. Some say that Covid19 Economic crisis pushed the innovation on the traditional businesses whereas otherwise should have been executed by their corresponding CEO or CTO: Now it is unquestionably the unnecessary need to have physical presence of employee at offices all days; business meetings are now acceptable through videocall presence reducing the need for business trips; working for remotely markets are somehow visible now enabling employee from i.e. Finland attend a banking need in Indonesia; etc.

While we will keep seeing new coming Neobanks pushed by a growing VC industry, we'll keep witnessing market values reduction for traditional banks until major changes are taken. Sooner than later, we'll start also reading about how traditional banks will be looking for possible Neobanks buyouts, mostly pushed by the circumstances, as much as by exiting strategy for aggressive Fintech founders, who will become the Henry Ford of the banking industry.